With dozens of albums and singles released over the course of her career, Harris is one of the world’s best selling country and folk artists

The acclaimed Folk and Country singer-songwriter Emmylou Harris was born in Birmingham, Alabama, on April 2, 1947. She begun her music career during the 1960’s, and moved to New York City where she worked as a waitress to support herself while performing folk songs in Greenwich Village coffeehouses during the 1960s folk music boom. In 1969 she released her debut album Gliding Bird, and in 1977 her album Elite Hotel earned her a Grammy Award. Throughout her career, Harris was awarded several Grammys and in 2018 she was presented the Grammy Lifetime Achievement Award. Emmylou, who has worked with numerous artists, has a body of work that include recordings as a solo artist, a bandleader, an interpreter of other composers’ works, a singer songwriter, and a backing vocalist and duet partner. Among some of her best known songs are “A Love That Will Never Grow Old”, “Here, There and Everywhere” (a Beatles original), “Mister Sandman” and “Together Again” With dozens of albums and singles released over the course of her career, she has won 14 Grammys, the Polar Music Prize, and numerous other honors, including induction into the Country Music Hall of Fame.

Listen to Emmylou Harris performing her song “A Love That Will Never Grow Old”, featured in the Brokeback Mountain film soundtrack 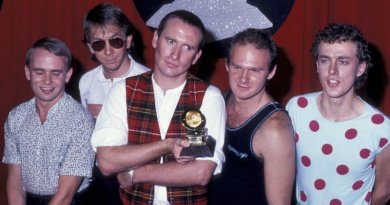 Some interesting facts about “Down Under” by Men At Work that went No.1 simultaneously on two countries in 1983

The actor was one of the first profitable and highly marketed child stars in film history, appearing as the iconic homeless child in the Charlie Chaplin’s classic “The Kid” and as an adult in “The Addams Family” 1960’s TV series

Check these 1993 fashion ads and images

Jeff Goldblum is a film, TV, and stage actor known for his roles in work like ‘The Fly,’ ‘Jurassic Park,’ ‘Will & Grace’, and ‘Thor: Ragnarok’ turns 68 today