One of the main figures of the British Alternative Rock scene of the 1990’s, the former leadsinger of The Verve, Richard Ashcroft, wrote and co-wrote most of the successful band’s material, from their formation in 1990 until their original split in 1999. Ashcroft was born in Wigan, Lancashire, England on September 11, 1971. He formed The Verve in 1990, at the very beginning of the Brit Pop movement that brought bands such as the Blur, Pulp, Suede and Oasis. But while those bands had almost instant success, The Verve only were able to catch up with it in 1997, with their best selling album “Urban Hymns”, that featured their best well known songs including “Bittersweet Symphony”, “The Drugs Don’t Work”, “Sonnet” and “Lucky Man”. With “Bitter Sweet Symphony”, on which Ashcroft is the sole band member to share a co-writing credit, they climbed the charts worldwide, however, an unexpected controversy blocked the band to get any royalties from it.

The song used a sample of the Rolling Stones 1965 song “The Last Time”, in Andrew Oldham Orchestra’s recording instrumental version. According the band, the use of “The Last Time” sample had been negotiated legally, but the Rolling Stones’ record company successfully sued and argued that they had used “too much.” For more than 20 years Ashcroft and the band were forced to give ABKCO (Rolling Stones Record Company) 100 percent of the royalties, and in subsequent releases and use of the song, Mick Jagger and Keith Richards were given songwriting credits along with Ashcroft. In 1999 Richard Ashcroft disbanded The Verve and went on to become a solo artist, releasing three UK top three albums. In 2007 The Verve were reformed, but shortly after, in 2009, they disbanded again, and Ashcroft founded t e band RPA & the United Nations of Sound, releasing their debut album in 2010. In 2016 he released his fourth solo album “These People” and in 2019 received the Ivor Novello Award for Outstanding Contribution to British Music from the British Academy of Songwriters, Composers, and Authors. Recently, Ashcroft and The Verve’s “Bitter Sweet Symphony” returned to the music headlines as it was announced that Jagger and Richards had signed over the rights to him, and now, with sole writing credit, will receive all future royalties.

Also watch, the 1998 music video “Sonnet” by The Verve 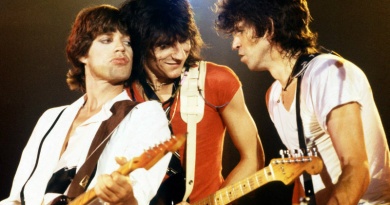 On April 1965 The Beatles score their 7th consecutive UK No.1 with “Ticket To Ride”