During the mid 1980’s Sinitta scored several hit songs, and became a Pop sensation mainly in Europe, produced by the famous hit and pop star makers Stock, Aitken and Waterman. But despite her big success in Europe, curiously, Sinitta’s career never really took off in the U.S, where she was born. Sinitta Malone was born on 19 October 1963 (during the beginning of her career she claimed 1968) in Seattle, Washington. The daughter of Canadian actress and singer Miquel Brown, who was just 14 when she gave birth, Sinitta spent her first six years in foster care and then with relatives until her mother was able to care for her. She moved to London during the early 1980’s after having already appearing in a 1981 horror flick “Shock Treatment” as Frankie and credited as Sinitta Renet. In London, she appeared in several West End productions most notably the first production of the Andrew Lloyd Webber play “Cats” and “Little Shop of Horrors”. She begun her Pop music career during the mid 1980’s and got her first hit with the single “So Macho”, initially released in 1985 and not well received, remaining low in the charts. However, upon being reissued in 1986 as part of her upcoming debut album “Sinitta”, the song peaked to No.2 in the UK singles charts and also turned out to be a big hit across Europe. Her debut album “Sinitta”, released in 1987, featured a team of star producers, Stock, Aitken and Waterman, Trevor Vallis, James George Hargreaves and Paul Hardcastle. The album included the four Sinitta’s biggest hits “So Macho”, “GTO”, “Toy Boy” and “Cross My Broken Heart”. Sinitta famously dated Simon Cowell during the mid 1980’s, the former couple remain best friends to this day and she has starred in many of Simon Cowel’s TV shows over the years including The X Factor. She also briefly dated Brad Pitt during the late 1980’s. As it happened with a lot of the 1980’s Pop music stars, during the 1990’s Sinitta’s career didn’t reflected the success she had back in the 1980’s. Her last studio album “Naughty Naughty” was released in 1995. During the 2000’s and 2010’s, Sinitta has become a regular British Reality TV star, aside of The X Factor she also has participated in “I’m a Celebrity, Get Me Out of Here!”, “Celebrity Masterchef” and during 2016 she became a series regular on the chat show Up “Late with Rylan” Now 57, Sinitta continues to perform her big hits, mainly across Europe and it’s a regular presence on LGBT and Pride events, where she has performed for Gay audiences several times in recent years. 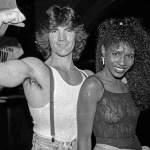 Look back at the 1986 Sinitta music video “So Macho”

Also watch: Sinitta gets interviewed and performs “So Macho” at the 2017 London Pride

Look back! Watch the 1987 Sinitta’s music video for her hit “Toy Boy”

“Born To Be Blue”: Chet Baker re-imagined and revisited

The Beatles enter the mainstream U.S charts for the first time in 1964 with “I Wanna Hold Your Hand”

With Black Sabbath Ozzy Osbourne pioneered the Heavy Metal genre during the 1970’s, his unique and sometimes insane lifestyle along with his distinguishable vocals and mannerisms have granted him a special place in Rock history and turned the man into an icon. Today the “Prince Of Darkness” Ozzy turns 72, we recap his life and career

Music Spotlight The 1990's Worth a Read

With Black Sabbath Ozzy Osbourne pioneered the Heavy Metal genre during the 1970’s, his unique and sometimes insane lifestyle along with his distinguishable vocals and mannerisms have granted him a special place in Rock history and turned the man into an icon. Today the “Prince Of Darkness” Ozzy turns 72, we recap his life and career

Gianni Versace was born on this day in 1946

He is a legend and one of the most influential Rock singers ever, but how well do you know The Prince Of Darkness Ozzy Osbourne? Do the quiz now to find out