The historical festival featuring names such as The Who, The Jimi Hendrix Experience and Jefferson Airplane begun on June 16, 1967

The 1967 Monterey Pop Festival: An important milestone of counterculture and Rock revolution

The Monterey Pop Festival it’s perhaps the very first blueprint for the modern open-air Rock festivals as we know it, with an estimated 200,000 attending during three days. The event took place in Monterey, California between June 16 and 19 of 1967 and it’s famous for featuring an amazing line up of some of the biggest, and now legendary, Rock and Pop artists at the time. Among some of the major acts listed were Eric Burdon, The Beach Boys (who canceled), Otis Redding, Jefferson Airplane, The Byrds, Janis Joplin with the Big Brother and The Holding Company, The Who, Mamas & Papas, Grateful Dead, Canned Heat, and the first major appearance of The Jimi Hendrix Experience in the U.S, in what remains their most famous concert. The festival also included Simon & Garfunkel, Country Joe and The Fish, Johnny Rivers, Lou Rawls, The Association, Buffalo Springfield, Moby Grape, Quicksilver Messenger Service, Booker T. & the M.G.s, The Electric Flag, The Steve Miller Band and Ravi Shankar. It was also the first major performance by Otis Redding in front of a predominantly white audience, who performed a sensational set. The festival was planned in seven weeks by promoter Lou Adler, John Phillips of The Mamas & the Papas, producer Alan Pariser, and publicist Derek Taylor (The Beatles press officer). The festival board included Mick Jagger, Paul McCartney, and Brian Wilson. Both The Who and The Jimi Hendrix Experience had the most explosive performances of the festival when they famously competed against each other. At the end of their set, The Who smashed their instruments and filled the stage with smoke bombs and explosions. Frightened roadies rushed onstage to scurry expensive microphones to safety. The Jimi Hendrix Experience, introduced by Brian Jones of The Rolling Stones who was at the time dating Nico of The Velvet Underground (they can be seen together on footage from the festival), won perhaps the prize for most outrageous and daring performance. Not running the risk to be forgotten in his own country, at the end of the set, Jimi Hendrix went into a frenetic massive feedback and noise battle with his guitar and the amps, after “making love” to his guitar, he covered it with gasoline and set it on fire, smashing into the pieces, as the audience looked both stunned and shocked at what was going on stage. The festival was recorded and filmed for prosperity and remains one of the most important films and audio documents of the late 1960’s Rock and counterculture revolution, starring so many of its core figures. It is generally regarded as one of the beginnings of the “Summer of Love”. The 1960’s would have several Rock festivals after Monterey, most notably, Woodstock in 1969, and would end dramatically with Altamont also in 1969, but none of those festivals were able to feature such an amazing all-star line up of artists at their prime as the Monterey Pop Festival.

Jefferson Airplane – “Somebody To Love”

The Who – “My Generation” 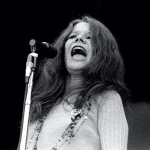 Bruce Springsteen turns 73 today He is known as The Boss and has been an enduring Rock music force over the last 40 years. A political and social voice and folk poet, Bruce Springsteen has come a long way since the release of his first record in 1973. We look back at his life and career

It’s been over twenty years since Heather Locklear played hottie Amanda Woodward in “Melrose Place” but she’s still pin-up-worthy as ever!

She is better known as being the wife of Beatle Paul McCartney, with whom she got married in 1969, however, Linda McCartney had already built a successful career as a Rock photographer during the 60’s photographing names such as The Rolling Stones, The Beatles, Jimi Hendrix and The Doors among many others